Dewi Sant was a Celtic monk of the sixth century. His mother was Non. The ruins of a small chapel dedicated to her memory may be seen near St. David’s Cathedral. His father was Sant, a son of Ceredig, King of Cardigan. Little is known for certain about Dewi Sant, but he founded several religious centers in Wales and western England, was consecrated archbishop during a pilgrimage to Jerusalem, and led an ascetic life. An account of his life was written towards the end of the 11th century by Rhygyfarch, a monk at Llanbadarn Fawr near Aberystwyth. Many prophesies were said to have preceded the birth of Dewi Sant, and many miracles were attributed to him. One miracle often recounted is that once when Dewi was preaching to a crowd at Llandewi Brefi those on the outer edges could not hear, so he spread a handkerchief on the ground, and stood on it to preach, whereupon the ground swelled up beneath him, and all could hear. A short account of Dewi Sant has been given by Nona Rees in St. David of Dewisland.

Much to our surprise, we received an award from the The Hat Jack. For twenty-two years, The Hat Jack, of Calhan, Colorado has supplied us with their trusty hat stretcher.

Early on at David Morgan we decided to sell hats up to size 64 (that’s an 8 in US sizing). We asked The Hat Jack for the size large, and they immediately accommodated us. And if you happen to need a 65 (8 1/8), we carry the Snowy River in that size.

Hat stretchers are perfect for keeping your hat’s shape, especially if you happen to be a long oval. It also works if you store your hats for a long period of time. For example, if you store your fur felts over the summer, you may want to keep them in a stretcher. 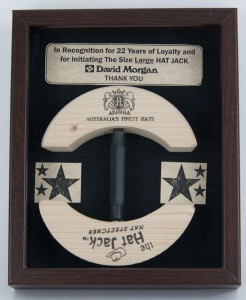