Corrine Hunt, co-designer of the 2010 Vancouver Olympics medals, is a First Nation Komoyue and Tlingit. Her art reflects the themes and traditions of her heritage, bringing the stories of her First Nations culture to the modern world. “I want to show how both the First Nations people and the art have evolved,” she explains.

Corrine’s work is not overly ornate. She conveys her message using as few lines as possible.

A raven is embossed on the front. The tan colored bag is made of soft and supple deerskin while the black is made of cow leather. It’s perfect for carrying the little essentials. The main compartment has a zip closure and an open interior pocket. There is one exterior pocket which snaps shut. 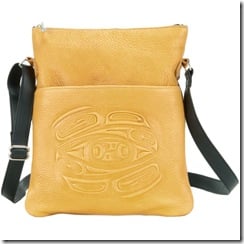 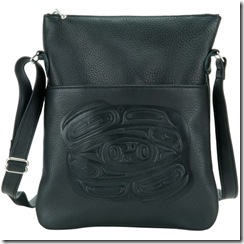 This pouch carries your passport and all of your other travel documents, including boarding pass and tickets. The deerskin pouch is embossed with Corrine’s own raven design. The main compartment and a smaller, front pocket zip shut. 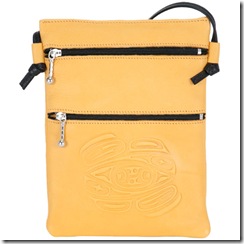 Get ready for fall and winter with a head warmer that is classic and stylish. The Hampton is ideal for women, especially petites. With its narrow brim and shorter crown, it adds elegance without being overwhelming.

The grosgrain ribbon is easily removable. Try adding your own colors, such as gold and orange for fall. And for winter, use a rich, deep blue. 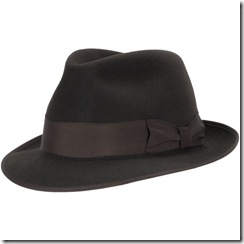 Adam Winrich, one of the world’s fastest whipcrackers, stopped by David Morgan in September.

Watch as he demonstrates a brief multiple cracking routine with a pair of black six foot Karaka bullwhips.