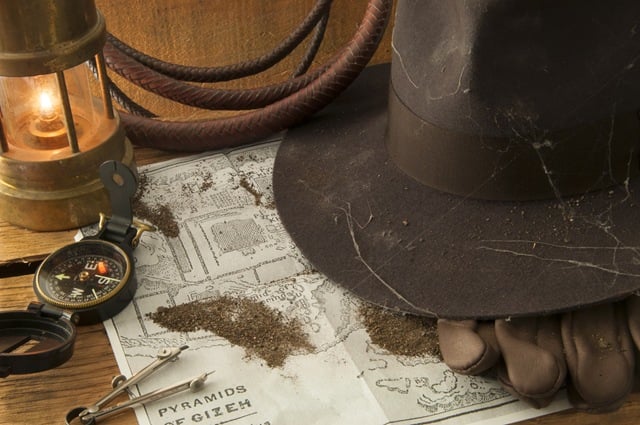 “Many have tried, all have failed.”

A month has passed since you dropped the gold coins into the wizened hands of the blind bookseller, but you still see his bone-white cataracts stare directly at you. Your broken Arabic understood every word. When you left his musty stall, deep in the labyrinth of that grand bazaar, Cairo’s Khan el-Khalili, you stowed the tome securely in your leather satchel. There was wisdom in his words. The French, the Germans and even a rogue element of Her Majesty’s Army all would kill for it. They almost poisoned you on the train to Aswan, but you know the smell of arsenic, even when disguised by the smell of Turkish Coffee.

Even now, alone in the desert, you pat your satchel to make sure the book is still secure. The Diary of the Mad Arab. You’ll need the answers to the puzzles that lay ahead.

A dust devil stirs the sands at your feet. You wipe your face, and reach for your canteen.

“Empty,” you mutter. You sucked the last drop this morning and the horizon shows no sign of an oasis. The chances of making it to one are slim. But you know that somewhere, just under your feet, hides the treasure written about in the Mad Arab’s book. The rock outcropping, the one described in the book juts through the sand. The face of Anubis, the jackal-headed god, still looks towards the west. The land of the setting sun. The land of the dead, according to the ancient Egyptians. Though eroded over the millennia by wind, his features are still eerily visible. A god refusing to pass from this world.

You mark the distance from the outcropping… one, two, three paces. Already fatigued from the journey, you pull out your field shovel and dig. The hot air shimmers over the sand as an occasional gust blows it into your face. Undeterred, you press on. Fickle sand falls back into the hole you dig, but for every shovel of sand that goes back in, you scoop out two.

A hard clank rings out in the quiet, desert air. Suddenly you are invigorated, as if you’ve just spent a night at Shepheard’s in Cairo. You dig faster until the shovel reveals a stone. Falling to your knees, you wipe away the sand and grin. There, painted on the stone is the cartouche you’ve seen in the Mad Arab’s book: Mnem-pa-tep. You have found the tomb of the forgotten Pharaoh.

You grasp the sharp edges and pull away the heavy stone. Cool air, wet and musty, fills your dried lungs. It takes three tries for your bloodied, shaking fingers to strike a match, but you light the lantern and lower it into the darkness. There’s about a twelve foot drop to the floor below.

You unpack your rope, fastening it securely to the stone. As you slide your way down, you remember the bookseller’s words: “Many have tried, all have failed.”

You take his warning to heart. Danger lurks ahead. It’s a good thing that your trusty whip hangs at your side.