David Morgan presents a new line of nylon whips from Karaka Products of New Zealand.  They are machine-braided nylon, with a lead shot loaded nylon fall and cracker.  Nylon whips are generally less expensive than hand braided leather whips and maintenance free.  If they get dirty, you can wash them with water.  They work well in rain, mud and snow.  We offer two types of Karaka whips: an 8 foot bullwhip, and a 6 foot stockwhip. 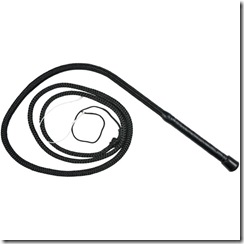 Item 368 in our store, the 8 foot Karaka Bullwhip: 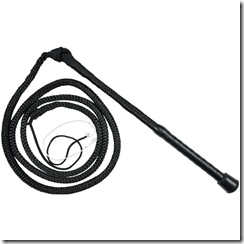 Item 366 in our store, the 6 foot Karaka Stockwhip

Maytie and Bob Leinweber brought a whip to us for repair.  We’re not sure what the whip is, but it appears to be a California style 8 plait Latigo.  It is a swivel-handle bullwhip.  The white and brown diamond pattern you see near the handle is from an extra set of strands braided into the whip for reinforcement.  An example of the whip can be seen in Whips and Whipmaking on page 25.

Later, Maytie sent us these pictures of Bob as a young man.  She explains:

These are the fun photos (no alcohol involved) taken by Bob Leinweber’s dad, Clarence.  They are of Bob and his friends Doug Peak, Richard Houghton & Doug Marshell for their friend Max Lacey who had joined the Navy and later went to Vietnam.  The pictures were taken in summer of 1961.  One of the pistols held by Bob is an original 1851 Navy Colt.  Bob and Doug learned the skills of the Bull Whip in 1958  and enjoyed their Whip Cracking Display for their friends and classmates all through school and into Bob’s Forest Ranger Days in Sequoia National Park, California.  Bob’s 16 foot Bull Whip was originally purchased out of a nationally known catalog in 1957.

Thanks Maytie and Bob for the great photographs!  We hope you enjoy them as much as we did. 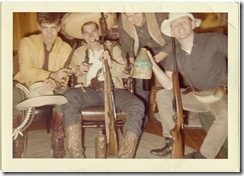 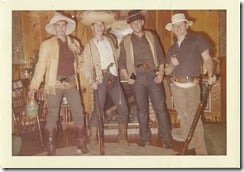 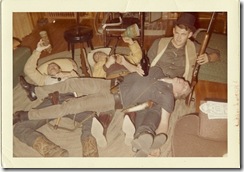 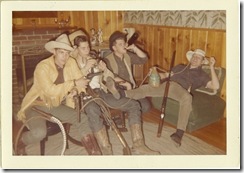