We are pleased to feature an additional artist in the Occulture line.

Julie Nangala Robertson is one of five daughters born in Yuendumu in 1973 to well-known Telstra Award winning artist, Dorothy Napangardi (Dec 2013). Since the late 1990’s, while often in the company of her talented mother, Julie has pursued and developed a creative visual language of her own, one which consists of a fascinating blend of stylised experimentation and ancient narrative.

Usually an aerial perspective along with a more recently and established distinctive monochromatic pallette, Julie’s current paintings (which depict the topographical features of her traditional country at the site of Pirlinyanu) have become works of extraordinary optical brilliance as she alternates the size of dots throughout her work as well as building up specific shapes or reference points often repeated with overdotting.

Julie has been painting with Warlukurlangu Artists Aboriginal Corporation, an Aboriginal owned and governed art centre located in Yuendumu, since 2007. She paints her mother’s Jukurrpa stories, stories that have been passed down to her by her mother and all the mothers before them for millennia. Her work has been included in numerous collections and exhibitions of Aboriginal Art in both Australia and overseas.

All artwork featured in the Occulture jewelry is licensed and royalties are paid directly to the individual artist. For more information about Julie Nangala Robertson and her artwork please visit warlu.com. 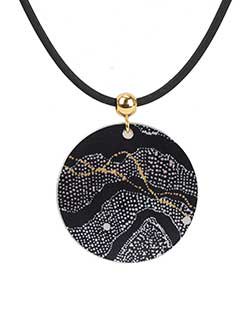 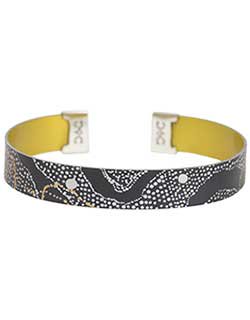