Hats have been worn for both fashion and function since Egyptian times. Soft felt hats gained in popularity as the city hat of choice after 1907. This style complemented the trend toward dressier men’s clothing and the lower crown was also more practical for getting in and out of low-slung automobiles with limited headroom. Prior to World War II, anyone walking hatless out of doors in a town would have been very conspicuous.

All the classic city hats were traditionally sold with open crowns, to be creased or bashed when sold. The standard crease was a center crease with dents near the front. Hats with this crease and the brim snapped down in front became known as fedora hats after the style was popularized in the 1888 play Fedora by V. Sardou, and worn by such well known real and fictional characters as Humphry Bogart’s character in Casa Blanca and The Maltese Falcon, Al Capone and Dick Tracy. The term fedora hat eventually expanded to include similarly shaped Panama hats and straw hats, as well as the traditional soft fur felt hats.

In the 1950’s fedoras and men’s city hats in general saw a decline in popularity. More recently we have seen an increase in the interest in fedora hats. The fedora’s practical wide brim and classic shape provide good sun protection and great style. It’s popularity has been further increased by Harrison Ford’s character in the Indiana Jones movies, who wore a fur felt hat with a modified fedora bash. (Our open crown Adventurer by Akubra is the same general shape, size and color as the hat worn in the movies.)

View our Fedoras and City Hats

Australia has been one of the most urban countries in the world since the 1850’s, with more than 90% of the people living in the big cities. Akubra has always served this urban population as well as the needs of drovers, stockmen, pastoralists and outdoorspeople. Akubra hats combine the best of Australian style with durability and function. We have been selling Akubra Hats here in the US since 1965 and are pleased to offer five classic urban hats in fur felt by Akubra:

• The Hampton is our narrowest brim Akubra, just 1-3/4 inches, with a center crease, ideal for city wear.

• The Campdraft, with snap brim, is  sold with a traditional open crown so you can personalize with your own crease.

• The Adventurer  is an open crown fedora similar in style and color to that worn by Indiana Jones in the Indiana Jones movies. Add an Indy Bash, or your own individualized crease to have your desired style of Fedora.

• The Sydney is a soft fedora with a snap brim. This hat is a classic Fedora, with an open crown for you to personalize with your own crease.

All the classic city hats were traditionally sold with open crowns, to be creased or bashed when sold. The standard crease was a center crease with dents near the front although this varied by individuals. You will enjoy creasing your hat into your own personal shape. Detailed instructions are given for several types of creases on our Bashing Your Open Crown Akubra page and in our Hat Manual (pdf).

Please follow the links below for more information about dress hats and related items. 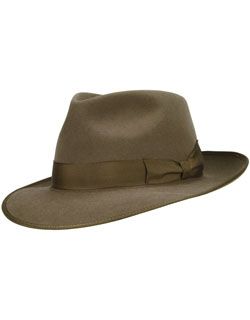 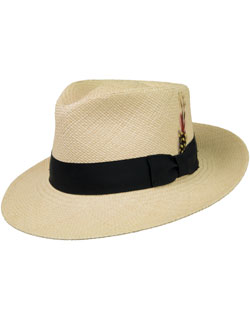