The origins of the waxed cotton used in our Australian riding coats go back to a Scottish mill that wove sails for the British clipper fleet. The mill made flax (linen) sails for the early clipper ships. Linseed oil was produced from the seeds extracted from the flax plants, and the oil was used to waterproof sailcloth for use in seamen’s clothing, particularly seamen’s capes, the forerunner of the fisherman’s slicker. The capes were fully waterproof, but heavy and became very stiff in cold weather. They also turned yellow in time, leading to the traditional yellow of the fisherman’s slicker. By the mid 1800’s, as the design of the clipper ships developed towards faster ships with larger sails, flax sails proved too heavy. A new cotton sail, made from strong two-ply yarns in both warp and weft, provided the lighter cloth with the extra strength for the larger sails. The new cotton material also was better for waterproof clothing, and, treated with linseed oil, was used for mariners’ waterproof clothing with little change up to the 1930’s.

In the 1930’s, the process of impregnating the cotton cloth with paraffin wax was developed. This produced a highly water resistant cloth, breathable, but without the stiffness and yellowing with age of the linseed oiled cloth. Woven in Scotland, it was dyed in Lancashire, taken to London for a cupro-ammonia treatment, returned to Lancashire for waxing, then to Scotland for sale and distribution. The very conservative Scottish company did not sell the product in their own home market for the first major test – they sent it to New Zealand on the other side of the earth. New Zealand was temperate and wet, but primarily it was a long way away, and any development problems could be overcome without affecting a later introduction in the home market. In the New Zealand trials however, the waxed cotton was a brilliant success. It became the standard fabric for rainwear, and the name given it there, Japara, was adopted as a trademark by the Scottish Mill.

After World War II, waxed cotton was sold in Britain for heavy duty rainwear. Farmers and gamekeepers were among the early users. Motorcyclists made a specialty market for which the fabric was well suited, and waxed cotton became and has remained the basis for the finest European motorcycle rainwear.

The early waxed cotton came in either black or dark olive. Color was a problem, for while the black was consistent, the olive was to a degree controlled by the amount of copper left from the cupro-ammonia treatment, and the dark olive varied considerably. Because of the variability of the olive, the corduroy collar on dark olive jackets was, and in the more traditional garment still is, a complementary dark brown.

Significant refinements in manufacture in recent years brought about lighter weight fabrics, still highly water resistant, wind resistant, and breathable, with outstanding durability. Better control of color, and a wider color range were developed. From the early farmer, gamekeeper, and motorcyclist users, waxed cotton rainwear soon reached the fisherman, shooter and horseman. Nowadays, waxed cotton has an unequalled position in town and country use, for casual wear or for reliable protection in the most rigorous situations.

Please follow the links below to learn more about waxed cotton and other related
items and information. 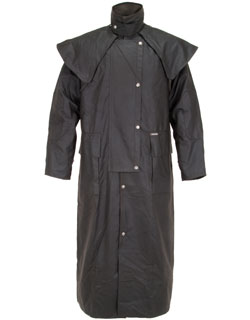 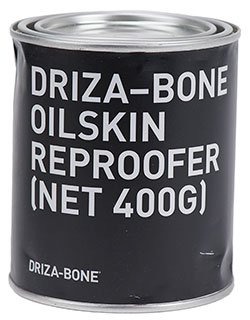