The original Kalgoorlie ring is one of our family heirlooms, something special from our Australian heritage. Our reproduction of this ring and the matching engagement ring, exclusive to David Morgan, are lost wax castings, made to the highest standards.

Australia was rapidly opening up with large numbers of immigrants coming from Britain towards the end of the 19th century. The government was English — life was fine for the rich and powerful, but harsh and stultifying for the rest. But Australia had goldfields, and the lure of gold brought hope. Gold also built sophisticated cities early on in Australia, with a full range of urban craftsman drawn from Victorian Britian. Among these, notably in this case, were jewelers.

Our story has two characters, a young man, the suitor, and a young woman. She and her sister had immigrated to Sydney from Northern Ireland in 1879 on subsidized fares during one of Ireland’s potato famines. The young man had been lucky in the goldfields near Kalgoorlie, in the far west of Australia. He had a ring cast from gold nuggets he dug and gave this ring to the young woman living far to the east in Sydney. Although the details of this romance have been lost, the ring itself has been passed down through the generations.

The Kalgoorlie ring is in a floral pattern, recognizably Victorian in style. The original ring is approximately 20 kt. gold, and has casting marks compatible with being cast from nuggets. We have reproduced the ring in 14 kt. yellow gold and in 14 kt. white gold. The ring is a substantial lost wax casting, made to the highest standards.

This diamond engagement or anniversary ring matches our Kalgoorlie ring, with a flower and leaf on each side of the diamond. The diamond is a brilliant cut 1/2 carat diamond, held in a white gold Tiffany crown. The ring is also available on special order without the diamond should you wish to have an heirloom diamond set in by your local jeweler.

Surface gold was discovered in Kalgoorlie, Western Australia in 1893, followed by the discovery of the Golden Mile, reputedly the world’s richest square mile of gold-bearing earth, at one time supporting more than 100 working mines. Much needed water was successfully piped in over 563 kilometers of wood and pitch pipes from Mundaring Weir, near Perth in 1903, thus ensuring that Kalgoorlie could survive. Today Kalgoorlie’s primary industries are nickel and gold mining. Many historical buildings from Kalgoorlie’s early days are still standing, as well as the original streets, wide enough in which to turn camel trains.

For more information on the gold and diamond rings we carry, please follow the links below. 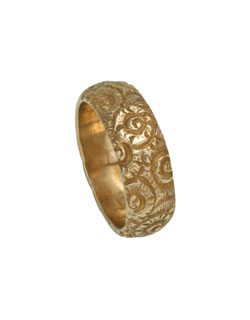 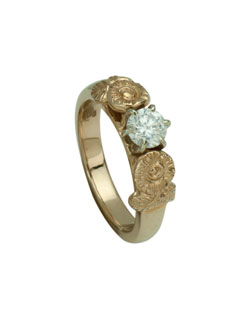