Scrimshaw work among the coastal Indians developed from the scrimshaw the sailors made on the ships trading for furs. These sailors often occupied their leisure time carving curios from ivory, bone or wood, as gifts for those at home or to trade for curios from foreign parts as they traveled. The early Indian scrimshaw was largely imitative of the sailors’ work, but soon began to show the native designs already well developed in totem poles, masks and house and box carvings. Carvings were done in ivory, bone, and wood, and bracelets were made in copper, silver and gold, the copper from sheet copper traded from the ships, the silver and gold from coins beaten flat. The most valuable, and sought after, of the scrimshaw and carvings was carved by the Haida from argillite, a soft slate found only in a deposit near Skidegate in the Queen Charlotte Islands, British Columbia. Development of the totem poles and the scrimshaw work was a phenomenon of the nineteenth century, dependant upon the tools obtained from trade and a market for curios among the traders and visitors from outside. The finest period for the art was the last half of the century, 1850 – 1900. Towards the end of the century as government, co-operating with churches, worked to undermine the self-respect of tribes already cut down by disease, production of scrimshaw almost ceased. Some wood carvings and engraved silver bracelets continued to be offered by the Tlingits in Alaska, and silver bracelets die stamped in Seattle to Tlingit designs by Bill Wilson and Amos Wallace were sold up the coast to both Indians and tourists, but little was available from Canada.

A revival started after the 2nd World War, and was given a major impetus in Canada when the government ruled that nothing could be sold as Indian (or Eskimo) art unless made by Indians (or Eskimos). Today, Indian art work is available in both classic and modern styles developed from the classic forms, much of it of outstanding quality. Wood carvings, as masks, rattles, bowls, totem poles, both full size and miniature, and bent-wood boxes are all available on the general market. Bracelets, and nowadays earrings, pendants and pins are available. Unique bracelets are hand engraved by the recognized Indian artists, but primarily as work commissioned by tribal members. Such work largely stays within the tribe. Bracelets die stamped in Seattle have been a trade item since the early 1900’s, when Joseph Mayer first put Tlingit designed bracelets onto dies. Bracelets and other silverwork to designs by current Indian artists, such as Danny Dennis, Everett Goenett, Robert Hewson and Odin Lonning, are now offered in addition to the older trade bracelets. Horn spoons are seldom seen, but reproductions or newer designs are occasionally offered in silver or pewter. Argillite carvings, in many ways the finest medium for totemic art, are available in small numbers and small size. Some years ago the deposit was blasted to make it easier to extract the slate, but the blasting shattered the rock, leaving only small pieces, suitable for pins and pendants but too small for the totem poles, plates, and boxes that were such magnificent examples of the Haida carvers’ art. The older work has largely passed to museums, although
some comes onto the market at prices that make it unsuitable for casual display. Quality reproductions of the older work are available in a range of styles that can be more casually displayed so that the art can be enjoyed on an every day basis.

Please follow the links below to learn more about the Pacific Northwest Coast Indian jewelry and reproductions we offer and other related items and information. 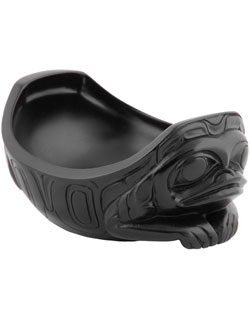 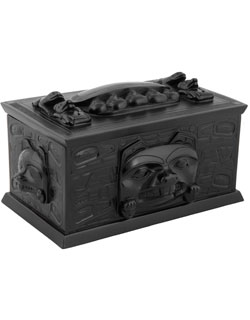