Little is known about the sculptural art of the Indians of the Pacific Northwest prior to the coming of the first explorers from Europe. Archaeological evidence indicates stone carvings and petroglyphs but little wood carving, although wood was the primary material used in carving. Wood does not last in the humid environment of this coast. Among the wooden objects the early explorers found were some  roughly carved house posts and elaborately decorated boxes, masks and other ceremonial items, but not in the quantities or quality seem subsequently. With the coming of the whites, and with them iron tools and the riches of the fur trade, the art of carving in wood flourished greatly. Disease also came with the whites. Later, as the Canadian and American governments took over, both governments, in conjunction with the churches, methodically destroyed the Indian culture and society in tribes already decimated by disease. Consequently the art lost its vitality, and the skills involved were not generally passed to the younger generation. The basis for maintaining the structure of the society was the potlatch system, which determined status and rights. Potlatches are ceremonial gatherings, hosted by individuals or groups, which provide an opportunity to claim rights and have these rights affirmed by the community, and to maintain or acquire status. Status was not a matter of material wealth or raw power, but rather of recognition and acknowledgment by the populace. The potlatch required much in the way of wood carving. Many rights involved dances and songs, necessitating masks, and the associated feasting needed food bowls and grease bowls, as well as spoons and ladles. Status could be declared by erecting a totem pole, which had to be carved. Much wealth was expended in preparation for a potlatch, in carving poles and masks, in gathering gifts to be given away to those who attended, and in preparing a feast for all.

The fur trade, particularly in sea-otter skins, initially provided the economic basis for greater and more elaborate potlatches. Iron tools made it possible to carve large totem poles, which became the monumental art of the 19th century. Scrimshaw work was developed to gain more wealth, first for trade with the fur traders, and then for general sale to settlers and tourists. On this basis Indian art developed rapidly during the 1800’s, despite the toll of disease. It was at its peak from about 1850 to 1900, but then decreased abruptly and lost its vitality and purpose almost totally as white settlement increased. Not only did disease increase, but also the power of government and the accompanying churches increased, and was systematically used to destroy the culture and self-respect of the Indians. Potlatching was prohibited by the Canadian government in 1884, and by the U.S. government in 1913. Schools were set up, run by churches or government, to take children away from their families and home areas. The children were given little education, forced to speak only English, and often physically, mentally, and sexually abused.

While all the coast Indians potlatched and produced art, the experience during this period varied by tribe. The Haida of the Queen Charlotte Islands, who developed the most outstanding carving, were most affected by contact with the whites and eventually lost almost all their culture and viability as a people. They had been well located to enter early into the lucrative trade in sea-otter furs, and were aggressive, the dominant group in warfare, and as such were able to travel up and down the coast with impunity. They also developed the scrimshaw trade profitably, both because they were the only group able to offer carvings in argillite, the soft stone found only in a local deposit, and because they were able to trade readily as far south as Victoria and Vancouver. Their totem poles were among the finest produced. The Haida, however, because of their early and extensive contacts with whites suffered worst from smallpox, measles, venereal disease, and alcohol. From an estimated population of 8,000 to 12,000, at their low point they dropped to about 800 individuals, many if not most of mixed blood.

Those tribes with less contact suffered somewhat less, but still disastrously. The Tlingit, the northern branch of the Haida in Alaska, were less well situated for the fur trade. They were prohibited from potlatching in 1913, later than the tribes in Canada, and the prohibition was lifted earlier, in 1934, while potlatching was within living memory. They kept up scrimshaw work in the form of small wooden totem poles and grease bowls, and engraved silver bracelets, but lacked the more profitable argillite.

The Tsimshian, on the mainland east of the Queen Charlotte Islands, were among the earliest to erect totem poles but benefited less from the fur trade or scrimshaw trade. As with the other tribes, fishing was the basis of their economy.

The Nootka, now known as the Nuu-cha-nulth, on the west side of Vancouver Island, were major participants in the early fur trade, but were wracked with internecine warfare, and so had little wealth for potlatching, and developed little scrimshaw work or art. The Salish, on the southern end of the region, away from the centers of art development, benefited little from either fur trade or scrimshaw.

The Kwakiutl, on the west side of Vancouver Island and on the mainland, preserved their art and culture better than the others. They had less benefit from the early fur trade, and little from scrimshaw, but maintained a viable fishing industry. While they too were weakened by disease and oppressed by both church and government, they appear to have had at times more enlightened government officials in charge. Their villages and fishing camps were spread over a wide area of coastal fiords, and they continued to potlatch unobtrusively in remote locations where they could avoid the police. While they were unable to continue to erect totem poles, they continued to carve masks and other ceremonial items, and so maintained continuity in the skills of the art.

Subsequent to the Second World War the Indians, with the opening up of society during the war, recognized that they could establish their rights and improve their situation. At the same time the museums, art circles, and the general public began to realize the loss of the unique art and culture of the Indians. The Canadian government lifted the prohibition against potlatching in 1951. Mungo Martin, a Kwakiutl with traditional carving skills, was employed for totem pole restoration and to teach others. The Canadians also set up a school for Indian art at ‘Ksan, and their government passed a law allowing only the work of Indians to be sold as Indian art. The revival in Northwest Coast Indian art has been helped by others, such as Bill Reid, a Haida of mixed blood, who although not taught in the traditional manner studied the classic work and produced outstanding pieces. As a consequence, today Indians are producing classic forms and developing new forms in a vibrant market. The art, not only in wood carving, but in other media as jewelry and graphic art finds its place with the outside art market and within the tribes for ceremonial use. In many communities totem poles have been erected in the traditional manner inspired by and attesting to the renewed self respect of the tribal peoples.

Please follow the links below for more information about the Pacific Northwest Coast Indian jewelry we offer and related items. 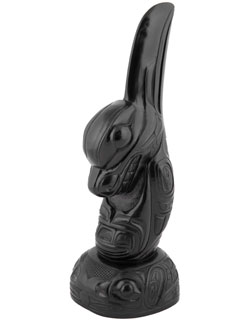 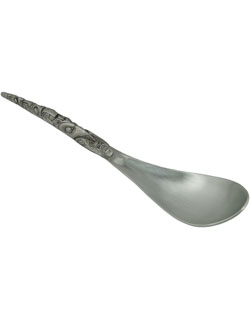 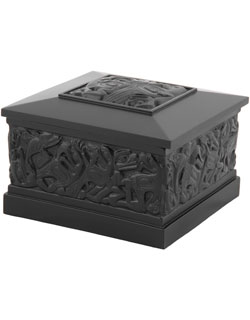