Some customers find it difficult to find the chinstrap hooks on our Akubra hats. This video below will help you not only find the hooks, but to attach the strap.

Chinstrap hooks are found on all of our hats except those in our Heritage Collection along with the Sydney, Stylemaster and Hemp Range. If you would like to have a chinstrap for one of these hats, we recommend a Stampede String.

In this video, David and Will Morgan show you first how to remove a hat band that is stitched to the felt, then how to add a different hat band.

Our hand-crafted chinstraps work great for hats with chinstrap hooks. But how can you take advantage of the quality of kangaroo leather when you don’t have hooks?

David Morgan’s new stampede string work simply by slipping the cotter pins underneath the sweatband and then bending the pins to keep the hooks in place. 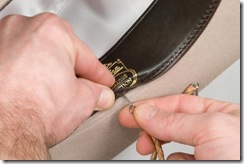 Hold the cotter pins together and slide them between the stitches at the base of the sweatband. A pair of pliers can be helpful. 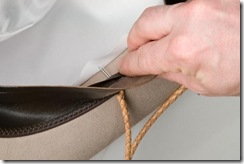 Pull them all the way through until the leather braid touches the sweatband. 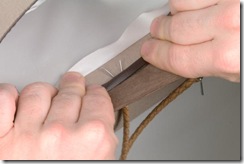 Bend the pins outward, as close to horizontal as possible, so they will not slip back through the sweatband. 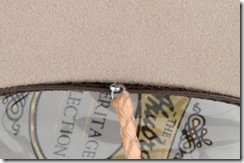 This is how it should look beneath the sweatband.

We were recently honored by the visit of two highly distinguished cowboy arts craftsmen.

Alfredo Campos, from Federal Way Washington, is one of the world’s foremost horsehair hitchers. In 1999 he was honored with a National Heritage Fellowship from the National Endowment for the Arts. David and Alfredo have known and encouraged each other for a very long time. Alfredo provided a quirt or two for our old Ballard store.

A couple of weeks ago Alfredo brought his Argentinian friend, Pablo Lozano to our new location in Bothell. He was accompanied by translator and Floridian cowboy Domingo Hernandez.

Pablo learned much of his craft from Luis Alberto Flores of Buenes Aires whom David had corresponded with from 1966 until recently. Luis Flores had hosted Bruce Grant in Argentina and taught him techniques which appear in the Encyclopedia of Leather and Rawhide Braiding. Pablo showed us a braid (using kangaroo leather!) that Bruce Grant had not documented in his book.

Pablo is a member of the Traditional Cowboy Arts Association.

We had an excellent time exchanging braiding tips and looking at the gaucho’s amazing work.

You can get some idea in the photographs below the patience and skill invested in creating these beautiful pieces. 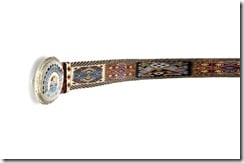 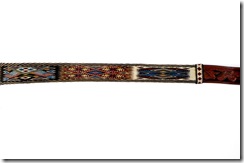 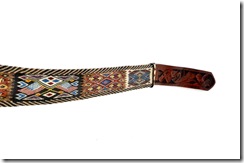 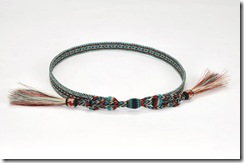 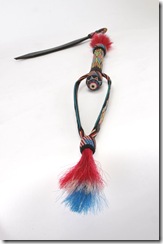 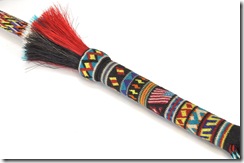 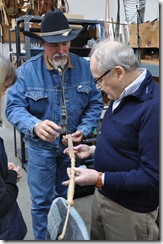 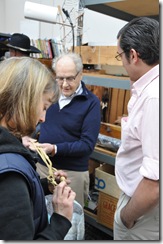 Below, Pablo’s rawhide work. The colors are obtained from coffee or walnut shells. 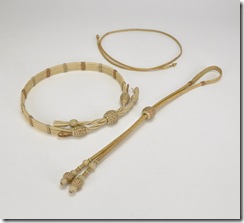 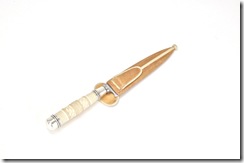 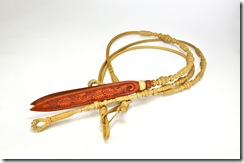 The application of braiding soap helps to make a tight whip, chinstrap or lanyard.  Meagan, our resident whipmaker, has a few suggestions:

Coat the entire length of all the strands with braiding soap prior to braiding.  Saturate the strands, particularly near the top, on heavy work.  You do not need to wait any time at all to begin braiding, though if you do it won’t hurt.  Occasionally if a skin is on the dry side it will seem to drink up the soap and may benefit from a resoaping.  This would especially be true if you leave it for a long time between braiding.  Usually this is not necessary.  It also is not necessary to resoap before rolling.  The braiding soap just allows the strands to pull in more tightly when braided, which in turn makes for a smoother, rounder surface after rolling.  It does not help in the rolling.

Meagan also recommends that when applying soap to each strand, it is more effective to pull the strand through the soap-filled hand rather than sliding your hand along the strand.  This also allows you to hold your thumb on the top part of the strand to control the amount of soap that is applied.

And remember to lay the strands in order before soaping.  You don’t want your soapy hands to have to untangle anything!

How to Make Whips

Braiding soap is an emulsion of fat in a soap-and-water solution.  The water in the solution conditions the lace for a greater stretch while the fat permits the leather strands to slip more tightly into place.  This allows the braid to be rolled more smoothly.

The following recipe for braiding soap has been used here at David Morgan for years. We usually make the braiding soap in a recycled 2 pound coffee can where the mixture can be prepared and stored in the same can.

1. Coarsely grate soap into a coffee can or pot suitable for stovetop use.

3. Heat the mixture almost to boiling, stirring occasionally. Take care not to overheat causing the mixture to boil over.

4. Add the lard to the hot soap mixture, continuing to heat until the lard is melted. Again, take care not to overheat causing the mixture to boil over.

5. Remove the mixture from the heat. Beat at high speed with an electric hand mixer to emulsify the fat. Take care not to splatter or spill the hot mixture.

Makes about 2 pounds. The braiding soap will have a light, creamy consistency.

Note: Ivory soap is recommended as a commonly available pure soap. Do not use a facial soap or detergent.

How to Make Whips